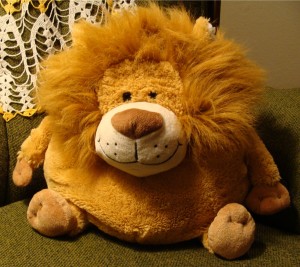 It has been quite a while since I thought about the Wizard of Oz. Truthfully I was never a huge fan of the movie. The witches and flying monkeys always bothered me.  I remember watching it once in the 80’s on TV and being perplexed when the scary monkeys didn’t appear.  The channel had cut them out for some unexplained reason, but even without the monkey scenes, I still wasn’t a fan.  By the time I reached adulthood, I had developed a dislike for the good witch as well as the bad one, but for entirely different reasons.

I thought Dorothy was childish, loved everything about Toto, felt sorry for the Tin Man, laughed at the Scarecrow, and wanted to pat the Cowardly Lion on the head.  I understood the point of the movie, but found it to be nauseatingly sweet.  Now, that I think about it more – I really didn’t like the movie.

Today however, I gained a greater appreciation for one of the characters.  I began to ponder the Cowardly Lion.  As long as he stayed in his dark and scary forest, he thought himself a coward.  He could not see the courage inside of himself; the courage it takes to live in a scary world and not run away.

Sadly, his definition of courage was based on the acts of thrill seekers and desperate men.  He thought that by facing danger, suffering hardship and journeying to some far off land, he would become brave and thereby receive the rewards given to brave men.   His journey to OZ had not been necessary, and even after leaving his comfort zone and placing himself in danger, he struggled to recognize his own natural courage. In the end, the Cowardly Lion had to be told of how he had always possessed the thing which he desired.  Even through the journey, danger and challenge, he had not recognized his own courageousness nature.

Real courage is often overlooked and undervalued.  The courage to like oneself, to make good choices, and to be your own cheerleader is too often called pride and therefore underdeveloped and under-recognized.  How many people, especially youth, seek challenge and danger just so they can receive a reward or praise?  Just so they can fit in with a crowd?

Today the Cowardly Lion became the focus of a mother-son discussion, and while the Wizard of Oz will never be a favorite movie, the Lion will hold a tender place in my heart.

War: More than Just a Battlefield