Wednesday morning one of our outdoor cats caught a baby bunny. He knew he shouldn’t have as soon as he saw my daughter approaching, and he dropped his catch before taking off to hide. The bunny, a cottontail, was only a week or so old, eyes not yet open. His name is Pip since he has such a little squeak, and we knew it was unlikely he would survive.

We raise big, fluffy Angora Rabbits.  They grow to be 7-10 pounds and are bigger than our cats.  When they are born, they are tiny but no where near as tiny as Pip.  The baby bottles we have used on the Angoras are bigger than Pip.  Pip is as tiny as his squeak.

Pip did well on the first day, and there was hope.  The danger for rabbits, baby rabbits especially, is that they will hop, or violently twitch, and break their backs.  Hungry baby rabbits twitch and spasmaticly jump when they sense it is feeding time. Sadly, even with great care, they can harm themselves.  Pip showed no signs of broken bones, and his back legs worked well.

By day two, Pip was actively eating. His belly would get large and then he would get sleepy.  After a bit of cuddling, he would take his nap in his shoe box home, just feet from my desk.

Today has been a long day.  The world is a crazy place. People we know, members of our community are hurting.  Some are gratefully praying because their children changed theaters last night and were safe as dawn shed light on a tragedy.  Others give long distant support to their children as friends in the hospitals are visited.

Today has been a very long day, and I sit here writing with Pip on my chest, knowing that his little body just can’t fight much longer.  So I keep him near, praying the beat of my heart will give him comfort, knowing his life is in God’s hands.  I knew when I held him on Wednesday that saving him was a long shot, but it is still better to try and fail the to never try at all.

Pip is such a little squeak, but he is God’s and the tears running down my face do not negate the blessing God has given me as I have cared for Pip.  If Pip should live beyond today, it will be God’s will.  If today Pip breaths his final breath, it too, will be God’s will. 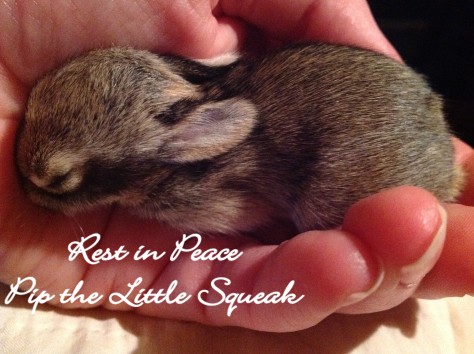